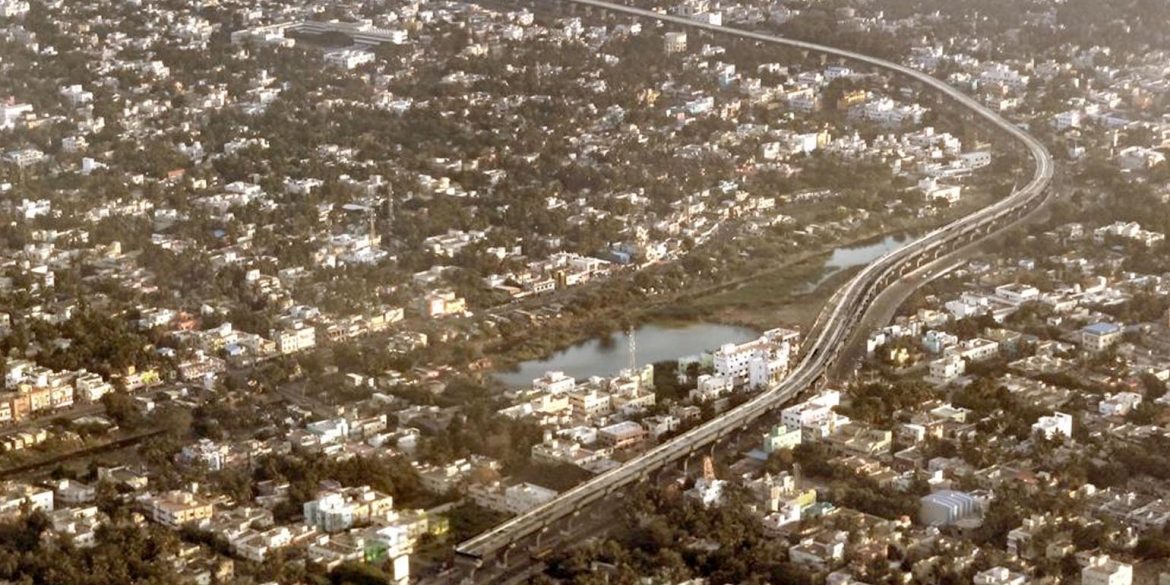 As the city of Chennai turns 376 this year and prepares to celebrate this milestone with Madras Week, architect Robert D. Stephens’ exhibit Madras Transit opens at The Folly on the 22 August 2015. Madras Transit, a series of contemporary photographs, stuns us with striking images of Chennai taken between 2014 and 2015 from 10,000 ft. above the ground.

The series, 24 colour images in all, captures the beautiful geometries, topography and the urban landscape of the city, the overlapping layers of history and progress, and invokes reflection on the way a city forms intertwining networks, over centuries. Each photo in this visual archive is accompanied by a factual record of air pollution levels in the area on the corresponding day, as measured by the Tamil Nadu Pollution Control Board.

It is also paired with a quote found in one of many antiquarian books from Robert’s collection, part of the ‘Reading Room’ section of the exhibit, that describes Madras as it once was – inviting viewers to meditate on how much the city has changed and yet endured over time.

Madras Transit is further supported by the Reading Room: “a tactile installation of antiquarian books related to Madras, dating back to the mid-1800’s”, as Robert describes it, “The Reading Room encourages people to ‘Please Touch: Feel free to sit and read a while.’ An invitation to slow down, and drift into a literary world whose histories shaped the form of our present urban conditions.”

Not only does this invite people to appreciate the history of the city, it offers them a sensory experience too – the way old libraries do, filled with tomes of books, exuding a musty smell that only a bookworm could truly appreciate.

Madras Transit is not the first of its kind that Robert has put together. Prior to this, he has also exhibited Mumbai Articles:  24 aerial photographs taken from the window seat of an aircraft that tells the tale of a city ridden with pollution, from 15000 feet above the ground. He will be following up Madras Transit with an exhibition, yet again on Bombay, entitled Mumbai North: Contemporary Aerial Photographs of Mumbai’s Suburbs.

Behind the Broadway scenes

About one such future project, Robert remarks excitedly, “Although in the very initial stages, I am dreamstorming over a series on Ahmedabad – what an incredible city!”

We look forward to all of his work, and hope to learn more about our cities by zooming out. Follow him on Facebook here.