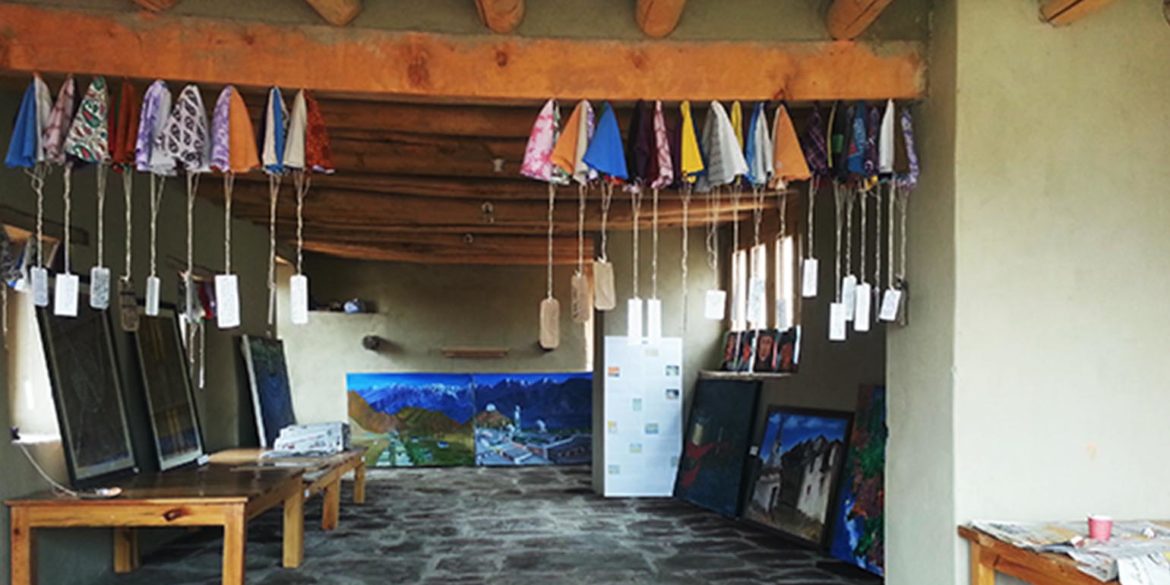 There’s a lot for art-lovers in Ladakh. The intricately carved windows, doors and furniture, an extravagant ensemble of traditional attire, textiles, and so much more.

Till the 1950s, Ladakh had been the Hermit kingdom, cutoff and largely inaccessible to the Indian mainland. Much like the culture and people, its art and craft remained uninfluenced by the outside world. Artists and craftsmen spent hours, cooped up in congested workshops, meticulously adding layers of detail to their work. The detailing in traditional Thangka paintings becomes a form of meditation for Buddhist monks in sub-zero temperatures.

But while there is ample richness and a great sense of pride in the traditional arts, for years contemporary arts made little progress here. The motifs were still of Buddhas and dragons, patterns bequeathed since centuries. Ladakh needed an alternative vision for art that spoke about its current society and the changes it had undergone. Hence, Ladakh Arts and Media Organisation (LAMO) was established in 2010.

LAMO is situated in the centre of Leh city, right below the Leh Palace, in a complex that comprises of two historical houses. These houses, which belonged to the Munshi (Secretary) of the king, were restored by a UK-based conservation architect John Harrison with minimum intervention. The traditional Ladakhi houses now serve as an ideal location for conducting art exhibitions, and have become a regular hangout spot for contemporary Ladakhi artists and photographers from all over the world to conduct workshops for the locals.

The LAMO Centre has been designed to conduct outreach programs, lectures, film screenings, research and documentation projects, workshops and exhibitions that showcase Ladakh’s material and visual culture, performing arts and literature. And to serve this purpose, the rooms of the old Munshi’s house have been converted to an art space with galleries, offices, a library and reading room, a screening room, a conference room, and an open-air performance site.

During a recent visit to LAMO, in an exhibition that displayed works of local artists, contemporary themes relating to acute climate change, failure of civic bodies, and rampant modernisation had been expressed.

The route to LAMO from the main market goes through centuries-old Kashmiri bakeries, narrow, dark corridors, meandering streets and alleys, and includes trekking on a mountain that commands a splendid view of the Stok range of the Himalayas, ultimately leading to the Leh Palace. LAMO is a lesser-explored, lesser-known place in the middle of Leh city that gives insight into contemporary Ladakhi culture, and is ideal for travellers to explore.

The next time you visit Ladakh, be sure you take that extra trek.

A version of this article was published in Kyoorius 29. Kyoorius 29, the last printed issue of Kyoorius Magazine is finally out and in circulation. Order yours on info@kyoorius.com.