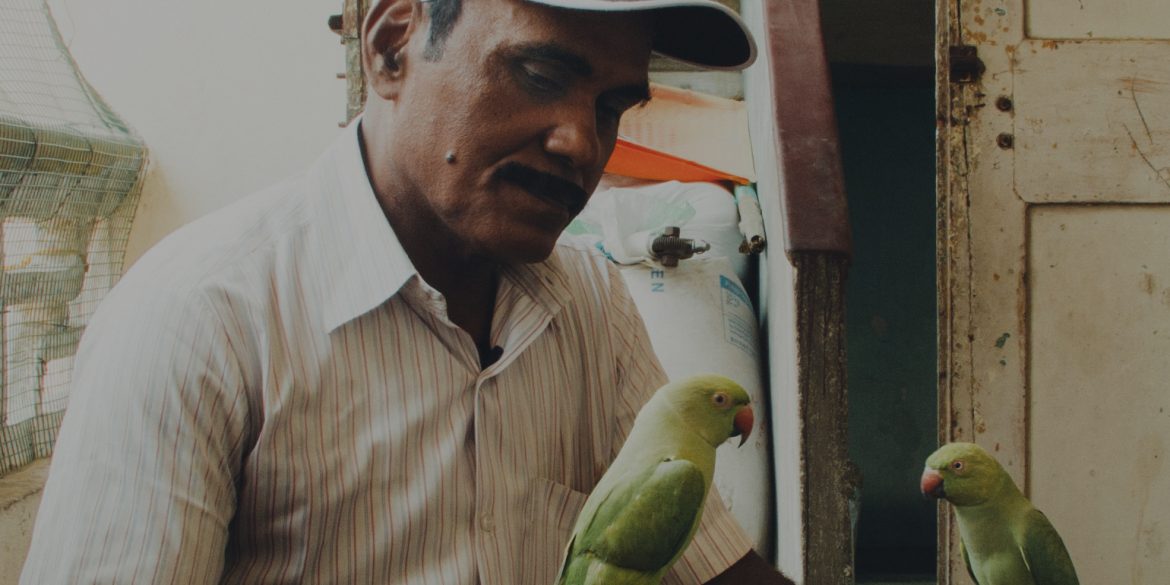 The Uncommon Man of Chennai

“Money is not everything in life, self satisfaction is."

Shrikkanth Govindarajan is a documentarian from Chennai, India. Although a graduate of engineering, his passion for photography led him to establish his venture, Take 13 Studios in 2012. He is currently involved with the team of photographers from India documenting the Special Olympics in Los Angeles.

The Uncommon Man of Chennai began as a one-man story and is now an ongoing project through which Shrikkanth brings to fore the stories of the “under-appreciated” passion-driven individuals who have impacted the city of Chennai in their own right.

The story of C. Sekar started to uncover itself, when Shrikkanth met Sekar at his home, the ‘Camera House’. Sekar is a simple man with a peculiar life who started by saying, “Money is not everything in life, self satisfaction is. If there is anything worth living life for, it is that.” Surrounded by about a 1000 parrots that flock to his home and 4000 cameras that he’s passionately preserved and collected over the years, it is his life-long yearning for self-satisfaction which makes his story unique.

The following words and photographs (by Shrikkanth) capture the story of C.Sekar, the Uncommon Man of Chennai. C.Sekar – The son of a mill worker and a 6th-standard-dropout came to Chennai 35 years ago trusting his instincts as a mechanic. After a diploma in electronics he started out as a TV & VCR mechanic but shifted to repairing cameras equipping himself with the gradual shift from completely manual to electronic. His tryst with photographic equipment eventually led him to realise his lifelong passion of collecting vintage cameras. Today his place aptly titled ‘The Camera House’ has a collection of over 4000 vintage cameras ranging from the wooden large format camera in the picture, a prototype of which he says is still used to capture the parliament group photo to a camera which once took Mahatama Gandhi‘s photo to MGR’s Hasselblad to the pocket size kodak film camera. Every day between 5.30 a.m. – 7.30 a.m. & between 4 p.m. – 6 p.m Sekar goes about his routine of placing rice grains on wooden slabs on his terrace. He has been requiring on an average of 20 kgs of rice everyday to pursue what he started 5 years ago, feeding parakeets. He has not left his place for a day since he has started this noble deed. He says he doesn’t want to break the routine and keep them hungry for a day but it feels like the routine is more important to his life than it is to the parakeets.

Sekar initially started out placing rice along the circumference of his terrace and as the numbers grew gradually he had to start keeping up with the demand. He now places 10-15 wooden slabs across the terrace with freshly prepared rice grains placed equidistant on them. Once the birds are done eating he comes back to clean up the place, clear the wooden slabs and pick up the wasted rice until evening where he goes about the whole process again. He says it started with 2 parrots and their numbers kept increasing until today where we can find around 600-700 of them on a normal day. The parrots take their time to eat up the rice, coming and leaving the place at their will for around 2 hours. Sekar believes that there is some godly intervention in parrots coming to his place since there are others too who have imitated him in trying to feed the birds but with no luck.

Once he is done with his job of setting up the wooden slabs and the rice for the parrots he gets down to the road. He is very particular not to disturb them when they eat and does not let anybody up his house as he fears it might scare them and they might not come back. He affectionately calls them ‘avange’ (meaning ‘them’, respectfully, in Tamil) and says ‘avange bayanduduvange’ (They will get scared). He is just a content silent observer for the next couple of hours. It’s a common sight to see passersby and photographers stand and enjoy the scene. A major portion of passersby on the road are first-time viewers who are in awe of what they have just seen since. They would have never expected to see something like this right in the middle of the city.

His efforts have encouraged people to free their caged birds. Some of them have had their wings cut to prevent them from flying and a few have lost their confidence to fly from prolonged caging even though they have wings. He helps them recover as they gradually grow their wings back and feeds them along with the other parrots picking them up once they leave hoping they would leave with the rest of the pack some day. He knows the worth of his collections abroad and the fact he can become a millionaire if he auctions them off but he doesn’t want to do that as he believes a certain kind of history would leave India if he does. The aim of his life is to make a museum of all his collections for which he needs support from the government and funds. He feels he has not received any kind of recognition or attention from the government for his monumental work and efforts and fears his legacy might end with him. His main source of income is still from repairing cameras, both digital and analog. There are some cameras which are very dear to him from his collection which he doesn’t sell but otherwise he has customers ranging across the world who have immense respect for him and his work. He guarantees life-long free service for cameras bought from him .

He visits this tea shop next to his house twice everyday after he has done keeping food for the parrots. At the end of the day he is just a humble man who goes about his everyday routine with extra ordinary commitment. He has dedicated his whole life to his work from the age of 15 when his father asked him to quit school. He has found tremendous satisfaction for himself his only regret being that he couldn‘t provide his wife and his children with a luxury life who have patiently been with him through all his deeds. Living in a rented house with bare minimum to survive on it is easy for them to question him on his success but is equally hard to not understand and support someone whose work and life is driven by such relentless passion. Men define success on their own terms and Sekar for what he set out to do is a tremendously successful man in his own right who deserves the respect of everyone around him.

A beautiful story of a simple man. You can follow Shrikkanth here.