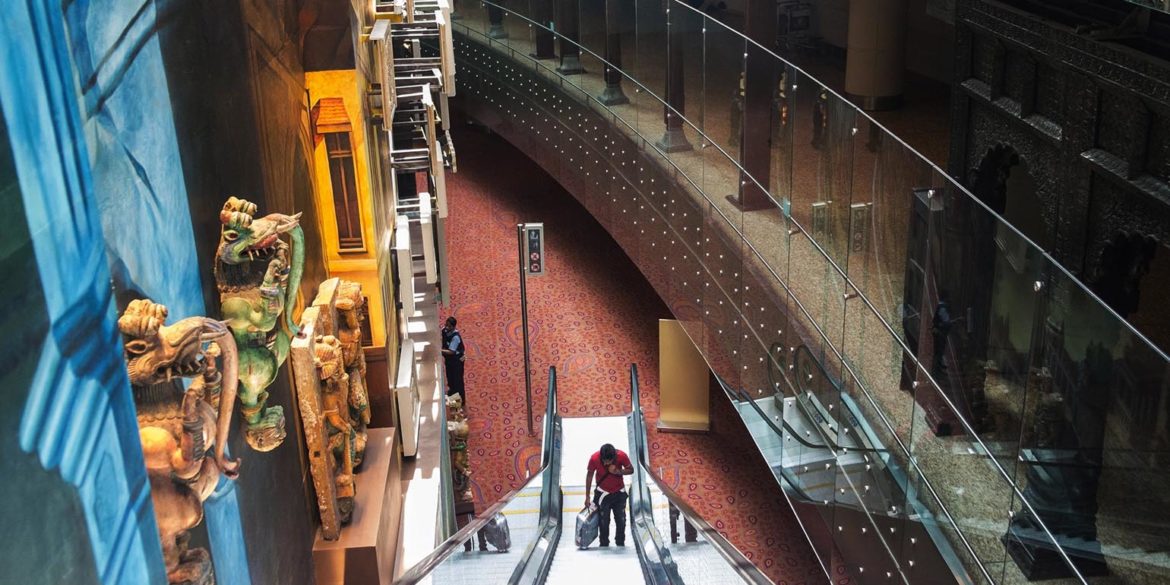 Possibly India’s largest public artwork project to date, Jaya He Museum at the Mumbai International Airport, spans across Terminal 2 and is a landmark corporate initiative to safeguard an immense cultural resource. Jaya He Museum provides the artisans with a unique platform to showcase their arts and crafts, many of which are dwindling due to a lack of opportunities.

Envisioned in 2009 by Sanjay Reddy, Vice-Chairman of GVK Power & Infrastructure Limited, who wished to create an airport that “can compete with any global equivalent but retains a distinct sense of place and identity, an airport that celebrates India”. Rajeev Sethi, one of South Asia’s leading curators and scenographers, translated this vision “into an unprecedented interdisciplinary platform of original art treasures from various regions of the country, commissioned works by master-craftspeople as well as artists and designers exploring contemporary visual language”.

Initially Rajeev titled this Art Program ‘Liminus 2’ derived from the Latin word liminalis referring to a threshold, aptly “populated by [a] myriad [of] symbols of departure and arrival, separation and assimilation, navigated anew each time…[thus] in its most tangible physical sense, the airport serves as an interstitial passage – located in a specific fixed site yet almost a world unto itself. Airports today [are like a] virtual metropolis [simultaneously] global and local, [falling] between public use and private experience, between work and home, commerce and culture…The Mumbai International Airport straddles the three worlds of imagination, ambition and reality”.

Jaya He is conceived as three distinct sections – Thresholds of India, Layered Narratives and Baggage Acclaimed. Approximately 3000 ethnographic objects were sourced exclusively for the Art Program. The interesting thing about the Jaya He museum is that it thoughtfully reflects “the many-layered narrative that is India… [intentionally] defying conventional notions of art- craft or traditional-modern as binaries”. This massive multi-disciplinary endeavour brought together designers, artists, artisans, architects, art historians, anthropologists and conservators with the best technicians “all working together on curatorial concepts that distil and interpret India”.

The first section -‘Thresholds of India’ consists of 6 thematic collections showcasing the India of today in all its complexity where “each artefact is an alphabet, which once placed with others, began composing themselves into sentences and eventually into stories”.

‘India Elemental’ is based on the concept of the ‘panchmahabhuta’, linked to the Hindu creation myth as well as the foundation of Ayurvedic science. Using the 5 elements to bring together artefacts from across the country – an installation of antique stone spouts represents Water; bronze and stone lamps represent Fire; cosmological diagrams made using lamp holders represent Space; mud architecture & shrines represent Earth; and canopies, flying locomotives & filigreed screens represent Air.

‘India Silent Sentinels’ is composed of various architectural and sculptural elements traditionally featured in thresholds of homes, step wells and religious architecture. Toranas, arches, pillars mark the entrance, creating a space of transition and preparation for those entering or exiting. Totems, brackets, deities, guardian figures and angels carved on the façade or placed near the doorway serve as declarations of identity and belonging, as well as symbolically guard the entrance.

‘India Global’ represents “an India in the making, where new forms, materials and ways of being coalesce in novel ways, the old and new coexisting side by side, spar with one another and more often than not, erupting into fantastic hybrids, at once global and local”.

‘India Greets’ is is a larger than life “tableau of doorways, façades, and porches” carefully sourced from various parts of the country replete with symbols of welcome and protection such as lotuses, sacred geometries, apsaras, ancestral figures, and more.

‘India Seamless’ consists of four installations, each from one corner of the country –Kashmir, Tamil Nadu, Rajasthan, and Bengal. Depicting the myths, histories and popular culture of these regions, the installations are creative collaborations between contemporary artists and artisans from these States.

‘India Moves’ is a “homage to journeys of the body and the soul, which find diverse articulations in India’s material culture and represent a larger philosophy where one’s location is in constant flux, subject to the cyclical motions of kala or time”. Real “antique boats, bullock carts, elephant howdahs, wedding litters and palanquins that speak of modes of transport both mundane and festive, while temple chariots and padukas evoke living traditions of deities who travel the earth, bestowing devotees with a glimpse of the divine”.

In the Arrivals corridor, flanking the moving walkways that lead the disembarking travelers towards the baggage claim area is the second section called ‘Layered Narratives’. Here one can see the story of Mumbai and urban India explored through 32 especially commissioned artworks by some of the leading artists in the country.

The third section titled ‘Baggage Acclaimed’ is made of four sculptural installations on the baggage carousels showcasing the diversity of textiles and costumes of India engaging arriving visitors while they wait for their luggage.

T2 is slated to cater to 40 million passengers per year which is more footfalls than that of any museum in the world. Rajeev highlights how “encased in the midst of high traffic and high security, these priceless treasures will reach more viewers each day than many museums could hope to do in a month”.

Jaya He “enlivens the kilometres of walls and huge spatial volumes of the Mumbai International Airport with meaning. Mumbai has produced one iconic public building that has symbolized entrance into the city whether by land, as in VT Station (1887), or by sea, as in the Gateway of India (1921). Following this tradition, T2 is envisaged as a 21st century counterpart to these illustrious forerunners – a gateway to the subcontinent for the millions who now travel by air”.

These collections are carefully planned while keeping human interaction angle in mind. There are information kiosks near each installation and Jaya He Museuminvites you to share your experience via photographs. You can learn  more about crafts from India and the 100 artists who have contributed to this collaboration on Jaya He’s website. You can also plan your visit, for no matter how many times you transit through the airport, Domestic or International, it been created in a way that you will be see a new detail in these exquisite “narrative trails” rich in ethnographic stories every time you are at the Airport.