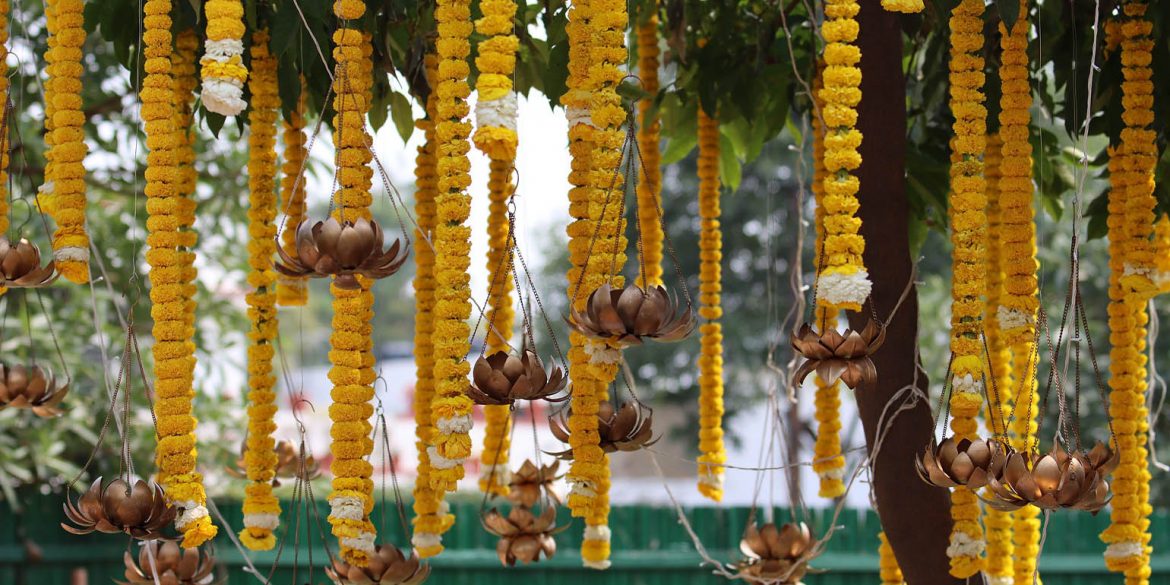 A conversation with a wedding set designer

Weddings are the biggest festival in India. From the humble neighbourhood ceremony where the couple marries in a ‘pandal’, to destination extravaganzas hosted by the rich and famous, Indian weddings are a community circus. It is the paraphernalia that goes into it: the three or four pre-wedding, and two or three post-wedding ceremonies besides the actual event, which truly make it a gargantuan effort. Naturally, it is big business. With the peak season having stormed by, we spoke to wedding set designer Brenda D’Cunha to see how she tackles this beast called the Big Fat Indian Wedding.

Wedding Set Design in India is a hula-hoop of collaboration, budgets, locations, traditions, debates, familial pressure, emotions running high and last-minute crisis management. A wedding set designer like Brenda, is very aware that the décor is the loudest and the most “vocal” aspect of the ceremony. Brenda has brought a wide range of sets to life: from futuristic and rustic to western and traditional Indian. Be it smaller ceremonies such as a pooja, to the ‘big day’ itself, her process is systematic. In accordance with the bride’s brief and her own sensibilities, Brenda gives the concept – in sketches and photoshopped or superimposed images, informing the final outcome. 3D images of the set with floral décor, lights, colours and fabrics are put together in a presentation for the client.

“What you see is what you get.” Once the concept is approved, Brenda then drafts Autocad working drawings which the fabricators follow line-by-line, to build the set.

The team is usually made up of fabricators, florist or floral designers, and lighting designers. Anatomy of a wedding design team

Event planners are the first to be roped in; they have their own lighting and sound experts, who usually come into play later on, when the production happens. The wedding set designer creates and delivers the concept. Then enter florists who tweak the arrangement. The fabricators are the ones who execute the design, giving it shape and form. The fabrics fall under a set designer’s domain but “most clients or usually their wives have a strong opinion when it comes to fabrics, and so they do it themselves.”

Florists are sometimes on the panel from day one, but they tend to collaborate with Brenda. It is the lighting which directly affects her designs and thus she looks into the execution of these details personally with the experts. Since the wedding industry is prone to monopolies, and clients are wellinformed – quotes from competing designers are invited and most teams are hand-picked beforehand.

“To be honest,” Brenda says, “I like working with any fabricator who harmonises with me, with no ego tantrums and will give me the same respect that I give them for their expertise. I would rather work towards solutions, than get hyper about the complexity of the design.” The journey so far…

Brenda has a Bachelor’s degree in Fine art along with a Master’s in Applied Art from JJ School of Art, Mumbai. “In those days, when we graduated from JJ, we were clueless where we would fit in and many of us went into advertising. I got a job in Da Cunha Associates, where I was for six months. But I didn’t quite like it; I was an introvert and not really too confident of myself.”

After her short stint there, Brenda set course for another ad agency which did basic cut-and-paste ads and this is where she was groomed into art direction. Learning art direction from scratch, she progressed to a bigger agency called Aaims Advertising. “All along I used to take up freelance projects designing window displays for shops; the design of the sets of these displays always intrigued me. So I had a healthy share of part-time work alongside the normal, to keep me going.”

But it wasn’t until she finally made the jump to Wizcraft, one of the biggest event-led entertainment and media companies today, that Brenda realised that events were a serious business. “Wizcraft was introduced to me by Benny Periera and I was skeptical in the beginning. It was 1989 or ‘90 and events were nothing at the time. I was amused by it then, but I took it up and entered as a part-timer. But once I went in, it was fun. I was one of the first designers to have joined them and I was exposed to all the aspects from pre to post-production and execution. The culture was good, they did events, sets, designs, graphics, in-house production, corporate shows and the growth here was tremendous. Most of my friends from ad agencies were amused and didn’t think it had any future.”

A sum greater than its parts: A personal view of the studio practice The turning point for Brenda came when the first IIFA (International Indian Film Academy) Awards happened in 1999-2000. As a creative head at Wizcraft, Brenda got to design the IIFA trophy and the entire set for the awards show. This was a major milestone in her career. “This is when Set Design for events started to be taken seriously in India. In 2004, Wizcraft launched the wedding cell which Veena Bachani and I headed together. They taught me lighting design, computers, drawings, production and the whole act. During my 16 years there, Viraf Sarkari, Director – Wizcraft was a huge support.”

When it comes to weddings, the amount of stress involved can leave one hyperventilating. Sometimes families realise on the eve of the wedding, after everyone’s left for the day, that their set needs to be turned around to face a completely new direction, say East, which is more auspicious. In many situations, people’s emotions are hurt when they are told that their choice of material might look bad in reality.

In a recent wedding, Brenda had to design a stage wherein the bride and groom’s backs would face the audience because the betrothed needed to face East, according to the clients. “I prefer to respect their decision, because weddings are their dreams which they have imagined for a long time. Outrightly saying no or being stuck on my design doesn’t work for me,” she says. Trust and respect seem to be two dominant factors when it comes to running the show at a wedding, and more than that, it’s the “attitude” which matters.

With every passing year, the wedding industry is getting bigger and bigger. Budgets are skyrocketing and families are beginning to ‘curate’ their own teams. Up until a few years ago, the term “destination” wouldn’t even precede the word “wedding”. Today, it is the most exciting wedding trend. Brenda tells us proudly that this year she even got to work on her first destination wedding in Abu Dhabi. As we lay the wedding frenzy to rest for this season, let’s brace ourselves for Bigger and Fatter madness in the next.

A version of this article was published in Kyoorius 24.