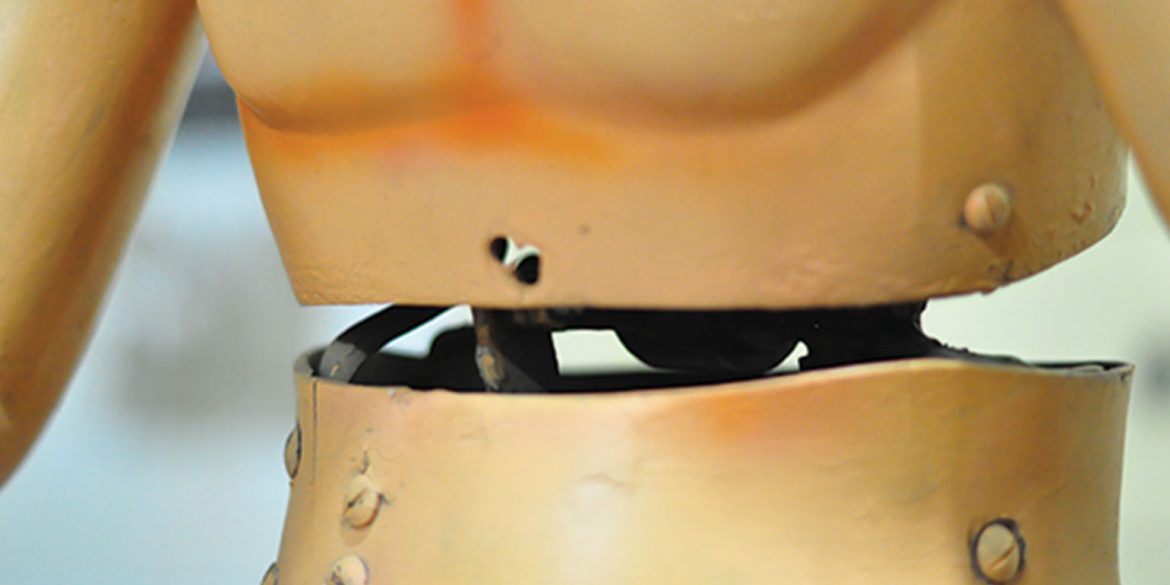 It looked like the gods had descended upon Lalbaug in central Mumbai. Near the now defunct Ganesh Talkies, in a shed crammed with half-done deities, 33-year-old Santosh Kambli establishes the reach of his business with an example. In a rather pixelated video, a Bollywood actor and her husband are seen proudly walking out of the shed bearing a mini-Ganesh in their arms. A crowd, composed of devotees and star-struck fans, throngs around them. It is raining and the street is a noisy blur.

In summer however, the Kambli Arts’ shed is drastically different in its quieter avatar with men casting plaster of Paris and fibre into statues. But idols of Maharashtra’s most popular deity are not the sole offering from Kambli Arts. The nearly 90-year-old establishment, associated with Mumbai’s flamboyant Lalbaugcha Raja, is also one of the pioneers of automata in the country.

Mythological and religious figures with limited movements and minimum use of tech are part of sonet-lumière shows that accompany Ganesh festivities across Maharashtra. Locally called as “Chal-chitra” (moving images), these tableaux narrate a mythological story or instruct a social message, giving devotees more reasons to linger around. The Kambli automata proudly tug at historical connections. Kambli explains that his grandfather Madhusudan Kambli, who is said never to have charged for a single idol he made till his demise in 1951, decorated a car for a rally commemorating the silver jubilee of King George V’s visit to India in 1935. “He turned a jeep into a regal plaster of Paris elephant. People were in awe and could have never guessed that there was a vehicle inside! And as the animal moved, its trunk swung up and down with the help of ropes and pulleys,” says Santosh. Renting out and selling automata to carnival floats, religious festivals and birthday parties, Kambli Arts has had to update the way their creations work. Heavy-duty plaster of Paris has been replaced by lighter fibre and physical strength has been substituted by electrical motors.

Santosh, a third-generation- Kambli in the trade, is a sculptor who believes that his sculpting skills reside in his genes. Unlike most of his family members who are graduates from the Sir JJ School of Art, Santosh had a job in marketing before he decided to return to his sculpting roots 13 years ago. While Santosh directs production at his studio, it is 57-year-old Shivaji Adsole who gives life to stationary statues. Unpainted limbs and torsos of statues make their way to Shivaji from Kambli Arts to be made whole and animated.

Working out of a breezeless room with several spare parts strewn around, Shivaji’s interest in automata began when he was just 12 under the mentorship of Madhusudan, whom he warmly refers to as Anna Kamble. Together, they first made monkeys, then elephants and later developed a full-fledged Sai Baba tableau with seven figures.

Chal-chitra and automata are sideshows at mainstream festivities and their purpose is primarily to delight and awe. “People should never be able to see how an automaton works. This way we can surprise them,” says Shivaji, with a mischievous glint in this eye. Waterworks, pyrotechnics and revolving stages are just some of the ways by which a chal-chitra tableau evokes a sense of childlike wonder. Santosh describes one of their most memorable sets about the Bhakti poet-saint Tukaram that was displayed at the Dadar flower market.

The age-old story goes that Tukaram drowns his verses in the river Indrayani, and the god Pandurang, pleased with his prayers, restores the poems on the riverbank. In the Kambli Arts’ set, the river goddess Indrayani emerges out of a six-feet- deep tank bearing in her hands a bundle of Tukaram’s verses. “We keep her hidden underwater for the entire time and reveal her only towards the end. Our viewers could never guess what was in store for them,” says Santosh.

Much like magicians who perfect their  tricks, Shivaji says that they devise clever   techniques to keep their audiences refreshed.  The Sai Baba set, when displayed, would have  clay lamps lighting themselves, almost   miraculously, as if on the saint’s behest.   One would be tempted to think that a row   of serial lights had been used in the lamps   but Shivaji is quick to correct you. “We had 12 volt coils that get heated up and set the   wick on fire. 10 such coils were used for 10   lamps,” he explains. He asks if he can show   a demonstration of the self-lighting lamps in his small workshop and quickly assures that, “We are experts. And we have a fire extinguisher.” Despite the strong association that these automata have with religious celebrations, Kambli Arts and Shivaji customize them according to their clients’ tastes. At Kambli Arts, automata are not just restricted to divinities; cartoon characters and colourful fauna are part of their repertoire as well. On his phone, Santosh slides pictures of a cow with a nodding head made for a Swiss aficionado and a lion with a swishing tail made for a South African customer. He also shows a set of six tutari artistes made for a Canadian client. “They bow down and straighten themselves just like actual tutari musicians. We wanted these to be as close to life as possible,” says Santosh.

Over at Shivaji’s, a short distance away from his shop is an electricity metre room where automata stripped of their costumes are cloaked in sarees to protect them from wear and tear. There are musician-monkeys and musician-mice, a plump peacock and some generic men and women. “If a Muslim client wants these for a masjid festival, we costume them appropriately. Take this boy figure here, add a beard and a skullcap, and you are set,” explains Shivaji.

While the costuming depends on the stereotypical, Shivaji makes sure that these automata are easily recognisable with stock identity markers. While their bestsellers are the divine and the mythological, Shivaji says that they often get orders to make automata of characters from regional films and television shows. But Shivaji is not sure if it is a viable decision. “It takes about eight people to make one statue and two to fit in the mechanics. It can be a job that is a fortnight long and about 30,000 rupees for an eight-feet-high statue. If these television shows go out of fashion, few will want to rent these figures. Then they will stay covered up in the shed forever,” he rues. Santosh also states that it is important to exercise discretion when it comes to making robots out of statues.

Some are better left stationary. The figure of Swami Samarth, a Maharashtrian saint, for instance, has no purpose with movements. Sai Baba and his many miracles, on the other hand, are bettered with moving figures. An imposing 14-feet-high figure of the goddess Kali that stands at the entrance of the shed, would look fascinating with her five pairs of moving arms, says Santosh. “But it is too late now. We should have thought of that before we painted her,” he laughs. On a more serious note, he adds, “In India, you have to be careful what you depict since there are lots of restrictions. We have to be sensitive to every community’s needs. God is God and you can’t disrespect these figures.”

The rudimentary robotics of these automata has taken a beating in the last decade, says Santosh. With the advancement of television and other forms of digital entertainment, the number of customers who seek automata has been on the downhill slope. Add to this the rising cost of materials: it is not considered cheap to rent a six-feet-deep tank anymore. However, the major challenge is space, a concern that affects most in Mumbai with its lugubrious realty prices. “People want really gigantic automata now and we just don’t have the space in Lalbaug to house them,” says Shivaji. Despite the uncertain fate of the curious automata in Mumbai, Shivaji is certain about one factor. “People love listening to stories and I am not talking just about children. Tell them a good story and even adults turn into children for a moment,” he says.