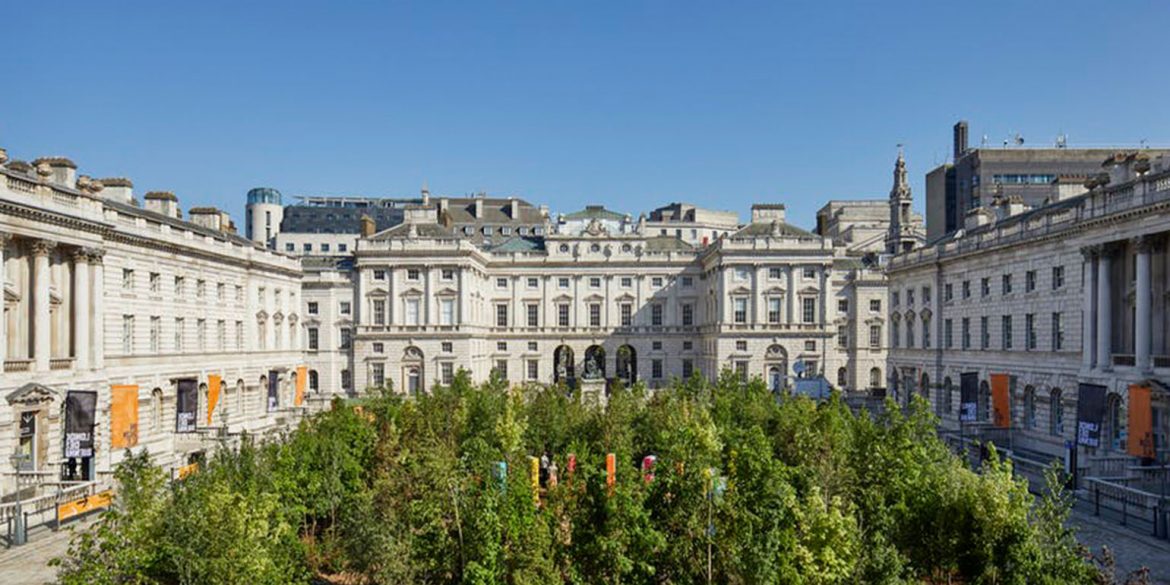 The art director of this year’s London Design Biennale, Es Devlin, intends to challenge archaic design principles and highlight current climate concerns by planting 400 trees in the heart of the capital.

The artist’s installation of “The Forest for Change”, aims “to counter the attitude of human dominance over nature by allowing a forest to overtake the entire courtyard” of the grand 18th-19th century building Somerset House. The installation anticipates better times, perhaps echoed in the words of the poet Lucy Larcom, that whoever “plants a tree, plants a hope.”

Somerset House was built in line with the principles of the Enlightenment, an intellectual and philosophical movement in 17th and 18th century Europe. At the centre of this was a synthesis of scientific discovery and reason, the power by which humans understand the universe and improve their own condition.

In architecture this was represented through neoclassicism – a style looking at the formal designs of the ancient Greeks and Romans while conforming to the rationality of science. In reaction to the floral excesses of the baroque and rococo, Enlightenment buildings were designed on the principles of simplicity, symmetry, mathematical precision and absolute functionality. In short, the defined, measurable restraint of science versus the indeterminate, unpredictability of nature.

This debate was identified by poet Enlightenment-era poet William Blake, who reacted that:

The tree which moves some to tears of joy is in the eyes of others only a green thing that stands in the way. Some see nature all ridicule and deformity… and some scarce see nature at all.

The website for Somerset House describes it as “one of the most beautiful courtyards in Europe” – It was predominantly designed by Sir William Chambers (1723-96), who was the architectural advisor to King George III and a founder member of the Royal Academy (Somerset House was the art institution’s first official home).

Chambers was influenced by the European continent’s restrained architectural language and followed Palladian principles, reflecting a popular style in Britain between 1715 and 1760 that was characterised by classical forms, symmetry and strict proportion. As such, the courtyard at Somerset House was designed to ensure the formal facades were not clouded by foliage.

Greenery is important in cities, it plays a vital role in directly filtering atmospheric pollutants through their leaves. However, Somerset Houses’s Palladian style precluded nature and continued to even as the city’s pollution problem grew.

First, there was London fog, which was prevalent at the time of the building’s construction (1776-1856). Trapping smoke and fumes from industrialisation and urban growth, the fog became deadly by the 1800s.

Later, having eradicated suffering from spewing chimneys, the city found sputtering fumes from tailpipes continued to poison its ecosystem and its people. Many open spaces, in particular those without plants, were designated for parking. The pragmatic Chambers could not have anticipated his courtyard’s low point when its lack of foliage allowed its transformation into a car park in the late 20th century.

Thankfully, after decades of private use by companies, parts of the building were opened up to the public in 2000 and its courtyard restored. The space, however, is still devoid of greenery.

When it comes to contemporary environmental ideas about urban environments, one particular strand of thought is the rewilding of cities. At the heart of this is the protection and enhancement of urban forests.

Because of our technological advancements, and more time spent inside buildings and cars, we have become somewhat disconnected from nature. A greener infrastructure would help shape our future cities to be more resilient, reconnecting people and helping reverse the destruction of the past, while tackling present environmental issues.

This leaves us with the central question of how design can provide solutions to these major challenges of our time.

“The Forest for Change” anticipates the hope of a summer opening-up during the current pandemic. As poet W.H. Auden said: “The trees encountered on a … stroll, reveal a lot about that country’s soul … a culture is no better than its woods.”

Visitors, having made their way through the labyrinth of biodiverse woodland, will encounter an information pavilion in a clearing at its centre containing big ideas on the climate crisis and other significant societal issues. These very concepts, for sure, might have been discussed by the courtyard’s original enlightened individuals were they now witness to what has become of their planet relative to their high ideals.

The motive that provoked Chambers and his contemporaries into forbidding trees in the courtyard was “reason”. Given the shifts and changes that the city, society, and the planet at large have undertaken, it is no longer reasonable to disassociate with friendly natural species.

The poet Kahlil Gibran said that “trees are poems that the earth writes upon the sky”. This opportunity to go for a responsible, communal forest walk in the middle of the metropolis is not only poetic reason enough, but in a socially isolating pandemic, it should also present us with a much-needed breath of fresh air.

David Reat, Director of Cultural Studies in the Department of Architecture, University of Strathclyde. This article is republished from The Conversation. Read the original article.