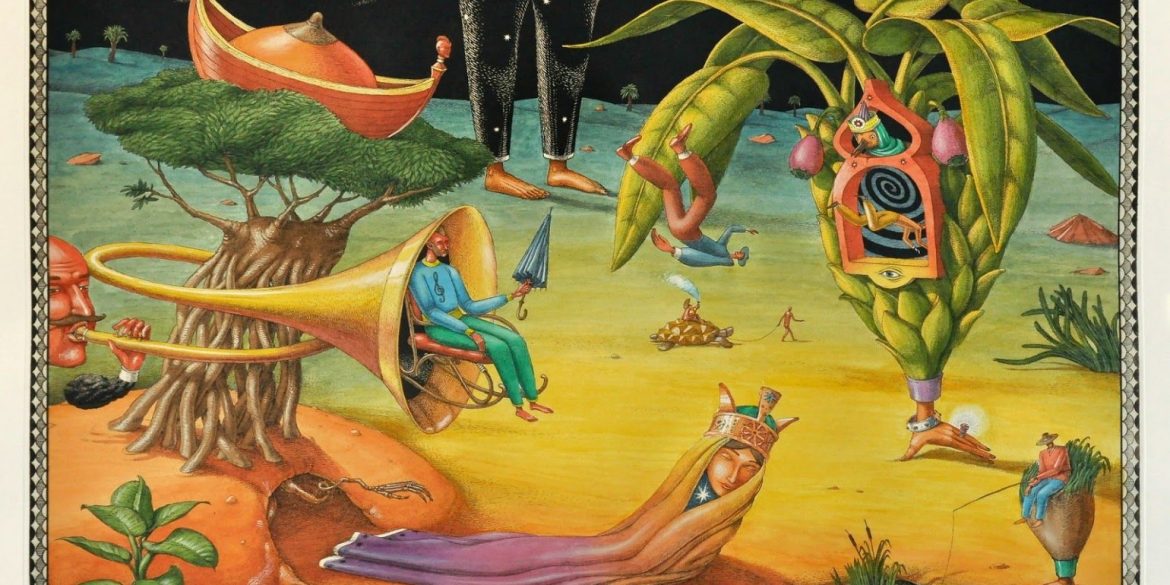 Interesni Kazki are a rarity, not just in their hometown of Kiev, but also the world over. When they started out in the nineties, they were two out of a handful of street artists from Ukraine, but today their collaborative murals and paintings feature all over the world: from Europe to South America, and now India. Utterly devoid of text, and infused with vibrant, warm colours, their work is both their commentary and an expression of their souls. “I don’t know what inspires me,” says Alexsei Borudov, or AEC (his crew-name). “But I know exactly who: God.”

Interesni Kazki means “Interesting Stories”, and that is the substance of their work — anything that interests them. From a quick survey of their repertoire, one picks up on a penchant for the metaphysical and the political. Whether they are painting about civil tension in Ukraine, love in Ibiza, or spirituality in India, the common elements of their bold and unique visual language are complex, fantastical and surreal images that anybody can identify with, irrespective of their origins. Two-headed snakes, alien creatures and invisible hands are a common sight.

Perhaps this is what makes their art so universal, even though the duo maintains that they did not start out with any such intention. “Spectator’s reaction is secondary. It depends on one’s perception level and worldview. We [are] just doing our job.” states Vladimir Antonov, the other half of the duo, who goes by the crew-name Waone.

Their work is by no means esoteric as their murals are informed by the semantics, mythology and traditions of the places they are painted in. In Varkala, Kerala, where their Indian stint was located, weathered buildings and fishermen’s huts are covered with stories such as “The Fisherman’s Dream”, “Hindu”, etc. which represent village and Indian culture and deal with topics such as the conflict between religion and spirituality. Their life’s work? “To run to the end of our mission on earth through Art.”