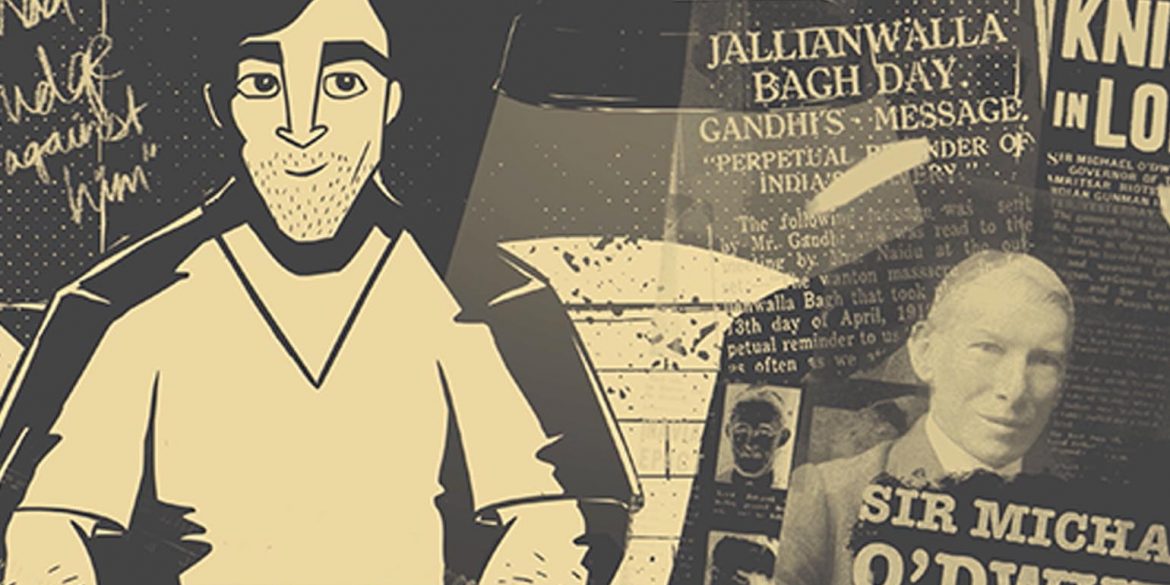 Behind the Seen: Frank Brazil or The Ballad of Udham Singh

Udham Singh was an Indian revolutionary best known for assassinating Michael O’Dwyer, a British official responsible for the Jallianwalla Bagh Massacre. One of his many aliases was Frank Brazil, the name for the new track by the Indian ska outfit, The Ska Vengers, released on the 75th anniversary of Singh’s execution on 31 July this year.

The Ska Vengers, who have gained prominence for their politically-and-socially conscious (and at times controversial) music, collaborated for the second time with Kunal Sen and Tisha Deb Pillai to tell the story in pictures. With inputs from the band members, the result is a well-detailed and engrossing graphic-novel-styled animated music video and we spoke to one half of the maker-duo, Kunal, about it.

“Taru (lead vocalist/Delhi Sultanate) is really into graphic novels and Manga, so he really wanted the video to have a similar visual quality. Stefan (keyboards/vocals) was all about highlighting little details, gestures and anecdotes that would add authenticity to the piece. Samara (lead vocalist/Begum X) had great inputs on the emotional curve of the piece and how we should best steer it to our advantage. Our job was to take all these inputs into consideration and weave a narrative that complements the song, as well as present the story in an interesting way.”

The character of Udham Singh strides purposefully from scene to scene with a wry, unwavering smile remaining constant even as other elements shift. Tisha, who designed and animated all the characters in the piece, is to credit for it. Kunal worked on all the background imagery, the 2D effects, and the compositing. “I’ve never really animated 2D effects like smoke and dust before, so I had a really fun time doing those. I really enjoyed animating the flame of the Ghadar party logo at 00:19. It’s a fleeting moment in the final video, but I remember staring at the fire loop for hours one night.”

The story of Udham Singh’s revenge spans 21 years and several countries, and the song does not tell the story in chronological order – which presented a major challenge: telling an anachronistic story visually, without resorting to potentially distracting date and place captions.

“We used different colour treatments to identify the 3 stages of Udham Singh’s life – him as a young teenager witnessing the Jallianwalla Bagh massacre; him as a young adult traveling the world and eventually assassinating Sir Michael O’Dwyer; and the last phase of his life – his trial and execution. The big challenge was how to create 3 different colour palettes without them looking like 3 unrelated videos.” They animated the film in grayscale and left the colour decisions to the end of the process.

What were his favourite moments in the final product? “We were very keen on using interesting transitions wherever possible. I think my favourite part of the video is the transition at 01:50 where the camera tilts up to the sky in the first shot, and the sky then becomes the snow (the ground) for the second shot. It’s a simple yet elegant move, and the design and the animation go hand in hand.” Also check out the Ska Vengers’ earlier video, Modi, A Message to You, created by Kunal and Tisha.