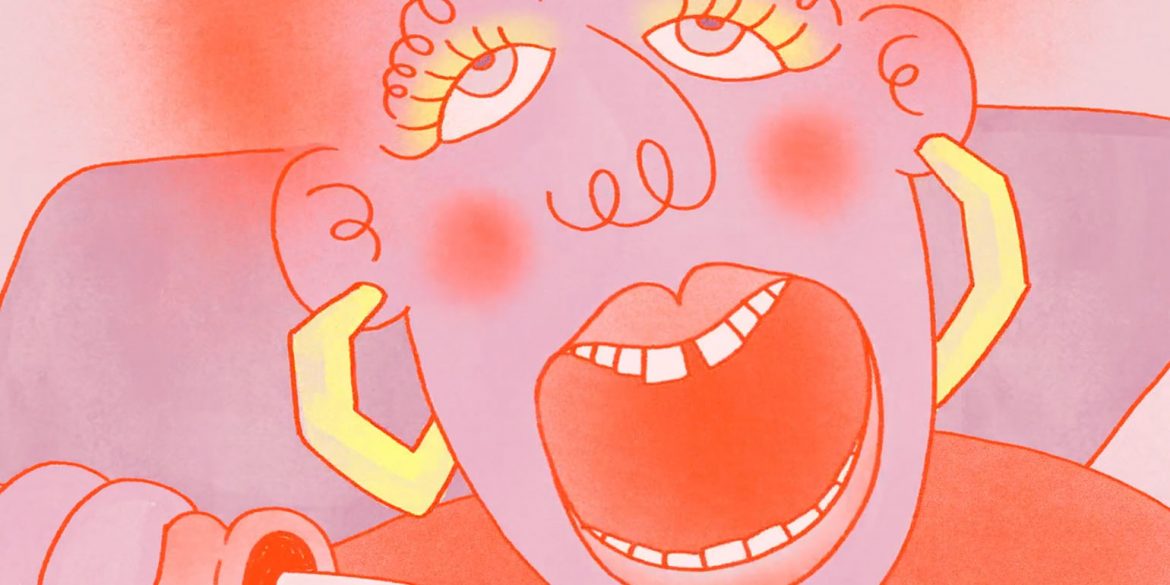 Our daily commute to and from work—however horrendous—was a defining part of our day. The chaos at the platform, the rush to board the trains and then to grab the seats, sellers making sound sales pitches, the sweltering heat, crunched in overcrowded trains or buses between sweating and smelling bodies is hellish and depressing. And we are united in feeling depressed about it with commuters on the other end of the world, like London-based animator, Anna Ginsburg. Though, there are also experiences that become our life stories. Anna had one such encounter that she revisited over and over during the lockdown. It moved her to make a short animation on the brief, chanced meeting. We spoke to Anna about this experience and what inspired her to animate it. The animation starts with a dedication: “An ode to the woman who sat next to me on the bus a few months ago”. Unedited conversation here:

I usually cycle into central London when working at Strange Beast, my wonderful production company. But when it’s particularly horrible weather or I am feeling extremely tired I get the tube from Tottenham court to Elephant and Castle and hop on the bus down the Old Kent Road to my flat. This journey takes 45 minutes to 1hour and is very depressing especially in the heat of summer. I’m also usually totally exhausted on these journeys because I’ve been too knackered to cycle.

Tell us about this chanced encounter.

I normally listen to music or podcasts and I was very lucky to not have my headphones on when a women climbed aboard singing  ‘Just the Two of Us’ . She sang very slowly and serenely as if she was floating above us all, sweating and swaying and squashed. She sat down next to me and closed her eyes to continue her rendition.

My whole body began to relax and my head started to tingly. She sang it non-stop for 30 mins and I entered a dreamy trance. Only as I approached my final stop I snapped out of this blissful state and popped on my phone to record the last minute or so of her singing.

At this point I had no desire to animate it. I simply wanted to re-listen later. I love the recording. Her voice is so mellow and joyful. I find her total oblivion to her stressful surroundings mesmerising.

How did you decide to animate her song?

The more I listened to it the more I loved it. I enjoy the accompaniments of recognisable bus sounds too, the ‘dings’ of people pressing the buttons and the stop name being announced on the bus tannoy. I had started some character tests pre-lockdown. During lockdown I began to appreciate the recording in a different way, it gained a poignancy I didn’t anticipate. It’s made me miss entertaining and uplifting encounters with strangers. And even slightly miss public transport (especially people watching on the bus). I felt motivated to fully animate the sound bite during lockdown partly due to this feeling of missing the general public and partly because projects kept getting cancelled due to the fact that a global recession is on the cards, so I had some time on my hands!

Are the other characters from your commute as well?

The other characters are imagined. I designed most of them before lockdown and some during. I wish I could say they were drawn from observation on a London bus but I always get motion sickness when I attempt a drawing on the bus.

How long did it take you?

It is!! I started designs pre lockdown but felt motivated to animation the whole recording during lockdown, especially because I felt even fonder of the recording in this new context. It took about 6 weeks as my animation style is very labour intensive. It’s all hand drawn and then coloured frame by frame using photoshop brushes. I was glad to have the time to focus on making it a fully formed finished film although it is very short.

Are you missing the commute?

I do not miss the commute as such, public transport in London can be very grim and I definitely don’t miss the tube. I have cried on every form of London public transport and from this bleak survey I have discovered people behave better the closer they are to the sky.  I miss the entertaining and uplifting encounters with strangers you have on the bus (more likely on the top deck) and sometimes on the overground.

I also miss the opportunity for people watching, there aren’t many contexts which compare for people watching. Being in such close proximity to the widest range of people for a prolonged period of time, hearing snippets of conversations and trying to understand mysterious interactions (especially between couples). Attempting to spy on people in the park at a distance doesn’t really compare.